In the world of Advertising and Public Relations, ethics plays a huge role in all the decisions made. The Media Ethics Initiative started by Dr. Scott R. Stroud (Communication Studies) aims to highlight the choices, consequences, and values involved in our communicative activities. We sat down with Dr. Stroud to talk about the Media Ethics Initiative, ethics in advertising and even that controversial Pepsi ad. 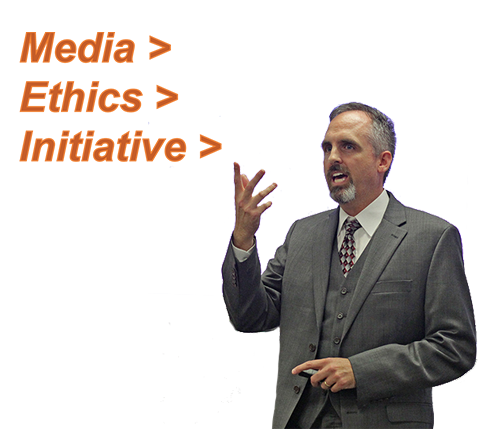 In your own words, what is the Media Ethics Initiative?

I started the Media Ethics Initiative a year ago as a way to promote and publicize the great research in the Moody College of Communication being done on various aspects of media, communication and the various choices we make that matter. Moody has some of the best research and work on campus on issues of communication, technology, media practices, and other colleges simply don’t know about this. So, those are my two concerns – to promote and publicize our cutting-edge research.

Interesting, so would you say that is what inspired you to start this?

My inspiration occurred when I was a fellow at the Center for Study of Democratic Politics at Princeton University in 2014 – 2015, and I saw the thriving intellectual culture there at Princeton. You could get a free lunch every day of the week if you were willing to sit through a world-famous academic giving a talk, so part of what I wanted to do when I came back here was to contribute more to this type of environment at Moody and UT.

Right now, the Media Ethics Initiative focuses largely on events that bring great scholars from outside and within Moody and puts them in front of our faculty and students. Eventually, we’re going to start holding conferences on themes of pressing importance. For instance, next year I’d like to plan a conference on appropriation and media. Is the borrowing of cultural artifacts, cultural practices and cultural symbols ethical or right or wrong? These kinds of things I think are interesting.

I see that MEI is touching on topics from green advertising to athletes taking a knee. Why do you think it is important to discuss such a large array of topics?

The challenge is when you start talking about communication or media, ethics (meaning some kind of account on what makes the right thing the right thing to do) becomes really diversified. Advertising is going to have a whole slew of decisions that are made there that you may not have in organizational communication, and there’s going to be some overlap. This is part of the challenge of the Media Ethics Initiative. How do we do justice to all the separate realms that we have great scholars working in, and how do we find common ground among these areas?

Part of the challenge with Media Ethics is to honor the complexity of these situations. For instance, with PII, a part of that story on whether your use is acceptable or not is going to come down to how that data was gained. For example, if I purchase something and I enter in my information to get a 10% discount, there’s a sense that I knew what I was getting involved in. So, some of these questions of information privacy will come down to what I have done to enable this collection, and some of this will purely involve a company’s ability to just scrape data on me that I had no idea I was giving. There’s a kind of spectrum of issues that needs to be fleshed out, and I think that’s part of the idea scholars can help us with. I don’t look at my work or other scholars’ work as settling issues. The goal is can we help people understand what is happening, how technology is getting us into these problems and maybe to see promising ways out of these situations.

So ethics is this kind of gray area?

Yes. One thing that’s important to understand is ethics is different from legality. There are things that are illegal and you can see an ethical reason why we’re glad the laws are that way.  In other cases, there are things that are perfectly legal to do, perhaps some of these data gathering practices, but if you think about it using some of our best ethical theories, we’d say there’s an ethical problem with that practice. This is the approach that I use in my mind to separate ethics from legality. Often times they’re not overlapping. Things can be legal, but not the right thing to do if you’re trying to be the most moral, ethical person possible.

Interesting. I once had a conversation with an advertising professional on the topic of media ethics, and how you should act as an advertiser. One thing she mentioned was she believes advertisers should have to take an oath of ethics similar to the oath a doctor takes “to do no harm.” Is that something you would agree with, or even something you could see one day being implemented?

I don’t think it’s very practical for media ethics in general. Why? Because I don’t think there’s an agreement on a specific list of actions as the right thing to do. Every once in awhile you will get subfields agreeing on such a list of actions; for instance, advertisers may come together and say here’s what we think of this, these are the practices we are going to agree to follow, and we’re going to police ourselves and have some binding agreement on. That’s fine. I’m skeptical you’ll ever be able to come up with a code of ethics in general for media practitioners that you’ll always want to say that totally was right. The best I could hope for is to try to train people with habits of attention to moral situations.

When I get asked what the key to moral behavior and moral training is, it’s going to be imagination. It’s not a matter of finding the right piles of good and bad actions; the question is, do you have the imagination to see what the other party might have had a problem with in a moral situation? Or, why this advertisement in the past was so objectionable and how you can make a better one that suits your needs and needs of say, some minority group attending to that ad in the future, so they won’t object to it. This is what I’m kind of getting at with moral training – habits of attention and imagination.

So, it’s kind of just

understanding where you should fall on the line of right and wrong?

Yes, a lot of our situations that we count as moral or morally problematic are because of failures of imagination. “I just didn’t think of how this ad would be offensive to some group,” or “I didn’t think how someone would take this as manipulation.” Now there’s probably going to be cases where someone was trying to be evil and they should be called out on this, but often it’s just a failure of imagination or thinking about someone else besides yourself.

Do you think that could be the common issue with the Pepsi ad with Kendall Jenner and the recent Dove ad? Do you think it comes down to the lack of imagination?

I think a big part of it is. With the Pepsi ad, it seemed like they wanted to do something good and socially edifying, it’s just they didn’t accurately imagine the reaction of important stakeholders in the social battles being fought now and how they would react to such an ad. I think it’s a prime case of where someone tried to do the right thing, but it didn’t look like the right thing after the dust settled, at least gauged by its effects. How do you avoid this in the future? It’s got to be thinking more thoroughly through all the parties that you want to help and that would be a stakeholder in such a situation. The question is always going to be: have we trained ourselves in ways of thinking through these problems in general so that when a specific choice in advertising comes about, can we address its intricacies and effects fully?

With current generations extremely involved in the social-sphere, what positives and negatives do you see from an ethical standpoint?

Part of this question involves the technologies that enable people to take part in so many interactions. Now if you don’t like something you can tweet at American Airlines, you can tweet at United, or you can start a petition. Social media magnifies your ability to voice outrage or to find moral problems. Too often in the past, problematic practices would come to light through gatekeepers like The New York Times. Now, if you have enough of a Twitter following or if you can find the right storylines to contextualize your complaint, you can get more people attending to your grievance.

I think this is often a good thing, as a lot of bad practices and actions that maybe the media wasn’t paying attention to can come to light. On the other hand, you’ve got a notoriously long list in online activism of false positives, or allegedly immoral or harmful actions that were brought to light that turned out not to be true. This is part of the challenge facing the modern generation and their communicative choices. New media can be very quick, very decisive and very loud. These can enable both good things and bad things. The goal of media ethics is to help us maximize the former and minimize the latter qualities as much as possible.

They definitely are. So at the end of the day, if there was just one thing we could do to be just a little more ethical with our media use, what would that be?

I think the shortcut I would give many folks is to try to think if you were on the other side of this action, would you like it or not? Would you find it to be a reasonable action or not? It’s the failure of empathy that I think is often the issue in moral situations, so this is the simple test I would give people – try to think of the other side of your action, and maybe that will make you change it, make you explain that action better. It might change what you do or how you do it.

To learn more about the Media Ethics Initiative and to see scheduled speakers, visit the website and Facebook page.